The LDS life of an LDS President 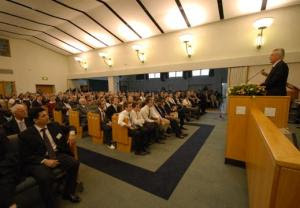 Joseph Smith was the first one way back in 1844. George Romney was the second one (Yes, Mitt's father). Midas Udal was third in 1972 followed by Bo Gritz in 1992, Orin Hatch in 2000, and Mitt Romney in 2008 and again for the 2012 election. They are all members of The Church of Jesus Christ of Latter-day Saints, or Mormons, who have run for President of the United States.

Lee Davidson of the Salt Lake Tribune wrote a news article detailing past church member candidates for President of the United States, or "POTUS" for short: interesting history and well worth the read.

It's fun using the term POTUS because in the Mormon church we sometimes refer to the Prophet as the "President," since he is the President of the church and head of the "First Presidency." It also sounds pretty cool when you say, "POTUS." Go ahead and try it 5 times fast and tell me it doesn't sound cool?

A couple days ago my wife and I were toying with a another topic: how would the life of an active member of the church change, in regards to the church-related aspects of their life, if they were elected President of the United States? Even if Romney misses his opportunity to be POTUS the odds of another member of the church running for the office again are quite high given the number of church members in Congress and politics in general.

The culture of the church is quite different than most other Christian religions in that the church has many cultural aspects that integrate with doctrinal principles. Living our religion is more than just going to church on Sunday. Many aspects of regular worship, doctrinal adherence, and sociality would be adversely affected by the rigorous schedule, daunting logistics, and intense security associated with the office of the President. Here is my take on some of those issues and impacts.

Instead of explaining each aspect in depth I only address the issues and impacts. Follow the linked title of each section to read more about the details of this part of our faith at Mormon.org.

Sunday worship
Callings
Home Teaching, Visiting Teaching
Family Home Evening
Scripture Reading
Priesthood Interviews: Temple Recommend, PPIs, and Tithing Settlement
Temple Attendance – This is the toughest nut to crack.
Word of Wisdom
Ward Activities/Socials
Post-Term Issues – impacts after POTUS leaves office and returns to “normal” life, or as normal as it gets for a former President.
As I was writing this post, my wife sent me this which addresses a lot of the same issues: http://thisweekinmormons.com/tag/temple-attendance/

So the main point here is that trying to live a "normal" church-attending life for a member of the Church would be nearly impossible. The commitment level of the person filling the office of the POTUS must weighed against the rigorous religious observance and practices, which will be left to fall behind while in office. This is a sacrifice one makes with that level of commitment. Think of it as the opposite of what happens with General Authorities: they give up everything but their church and their families to focus on their jobs. The President of the United States makes a similar sacrifice to serve the people in the greatest nation on earth.